Skip to main content
Home » What's New » Is there any debate left? Optical Illusion? Blue and Black or White and Gold? 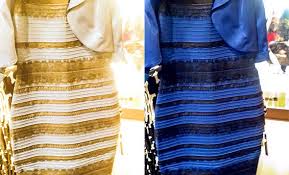 Blue and black or white and gold?  Just how did one dress cause so much confusion?

Do you yourself sometimes see blue and black and other times white and gold?

You might ask yourself how could those colors ever be mistaken for one another, they are completely opposite!  And they are.

You could attribute this phenomenon to your computer monitor, as the brighter exposure looks white and gold, while a darker setting makes it stand out in blue and black. Yet, could it still just be your eyes playing tricks on you? Absolutely! When we perceive color, our brain tries to sort out natural interference such as those caused by natural changes in lighting based on time of day. Those who see a white and gold dress could be dismissing the blue color of the dress itself, attributing the blueish color to the lighting instead.

Beau Lotto, a professor of neuroscience at University College London, says “the brain has evolved not to see absolutes, but to see the difference between things.” Because colours that appear in sunlight look different from those that appear under streetlights, for example, our brains have to focus on the relationship between colours, not the colours themselves. Lotto says we can “only speculate” about why some people see blue where others see white. It could be because some are focusing on the difference between the colours of the dress itself, some are looking at the difference between the dress and the background, and others are taking the colour of their computer monitor, and the room around it into account.”

There you have it, not only is beauty in the eye of the beholder, but also in how we see our world!